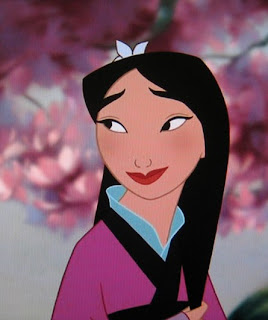 Mulan is a 1998 American animated musical film directed from Disney  It was by Walt Disney Pictures on June 19, 1998. The 36th animated feature in the Walt Disney Animated Classics, and a part of the Disney Renaissance, the film is based on the Chinese legend of Hua Mulan.


The Huns, led by the ruthless Shan Yu, invade Han China, forcing the Chinese emperor to command a general mobilization. Each family is given a conscription notice, requiring one man from each family to join the Chinese army. When Fa Mulan hears that her elderly father Fa Zhou, the only man in their family, is forced to join the army, she decides to stand in his place, disguising herself as a young man named "Ping". Fa Zhou learns that Mulan has taken his place and prays to his family's ancestors, who order their "Great Stone Dragon" to protect her. The ancestors are unaware that the statue of Great Stone Dragon failed to come to life, and that Mushu, a small dragon is the one to go and protect Mulan.
Mulan is initially misguided by Mushu in how to behave like a man, and starts a ruckus at the training camp. However, under command of Li Shang, she and her new friends at the camp, Yao, Ling and Chien-Po, become skilled warriors. Mushu, desiring to see Mulan succeed, creates a fake order from Li Shang's father, General Li, ordering Li Shang to follow them into the mountains. They arrive at a burnt-out village and discover that General Li and his forces have been wiped out by the Huns. As they solemnly leave the mountains, they are ambushed by the Huns, but use of a cannon by Mulan buries most of the enemy forces in an avalanche. Mulan is slashed by Shan Yu in his rage at her wiping out his army during the battle, and she is forced to reveal her deception after receiving medical attention. Instead of executing Mulan as the law requires, Li Shang decides to spare her life by leaving her on the mountain as the rest of the army departs for the Imperial City to report the news of the Huns' demise. However, the avalanche failed to eliminate all the enemies, as Mulan catches sight of a small number of surviving Huns, including Shan Yu, making their way to the City intent on capturing the Emperor.
In the Imperial City, Mulan attempts to warn Li Shang about Shan Yu, but he refuses to listen. The Huns appear and capture the Emperor, locking themselves inside the palace. With Mulan's help, Li Shang, Yao, Ling, and Chien-Po pose as concubines and are able to enter the palace and defeat Shan Yu's men. As Shang prevents Shan Yu from assassinating the Emperor, Mulan lures the Hun onto the roof where she engages him in single combat. Meanwhile, acting on Mulan's instructions, Mushu fires a bundle of fireworks rockets at Shan Yu on her signal and kills him. Mulan is praised by the Emperor and the people of China, who all bow to her as an unprecedented honor. While she accepts the Emperor's crest and Shan Yu's sword as gifts, she politely declines his offer to be his advisor and asks to return to her family. She returns home and presents these gifts to her father, but he is more overjoyed to have his daughter back safely. Li Shang, who has become enamored with Mulan, soon arrives under the guise of returning her helmet, but accepts the family's invitation for dinner. Earlier in the film, Mulan was declared unfit for marriage, but this is not the case with her budding romance with Li Shang. Mushu is granted a position as a Fa family guardian by the ancestors amid a returning celebration.