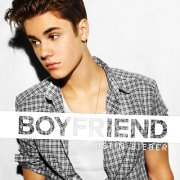 Teenage pop superstar Justin Bieber has revealed he models his career on that of Michael Jackson.

Asked by Forbes magazine who he admires most in the industry, Biebs replied: "I mean for me it's only one person. Everything that I do is kind of modelled after Michael Jackson."

As if emulating the king of pop wasn't enough, JB's manager Scooter Braun has plans for the Boyfriend singer to become a music industry "mini mogul".

Justin explained: "[Scooter] wants me to be knowledgeable about my business and know what I'm actually doing and not one of those artists that lets everybody take care of it. He wants me to be a mini mogul myself."

Having been in the business for three years and now newly graduated from high school, Biebs already has a firm grasp on the business.

Scooter Braun added: "Justin spends at least one hour a week with myself, with the business manager, with the lawyer - going over scenarios in business and learning and dissecting it.

"He always knows the right question to ask - which is pretty impressive. Even at 15 he was like that but he'll never be fearful in this business because he'll have a firm understanding of it."

Last week, Biebs revealed that a song on his new album Believe, which addresses Mariah Yeater's paternity allegations, was his Billy Jean.